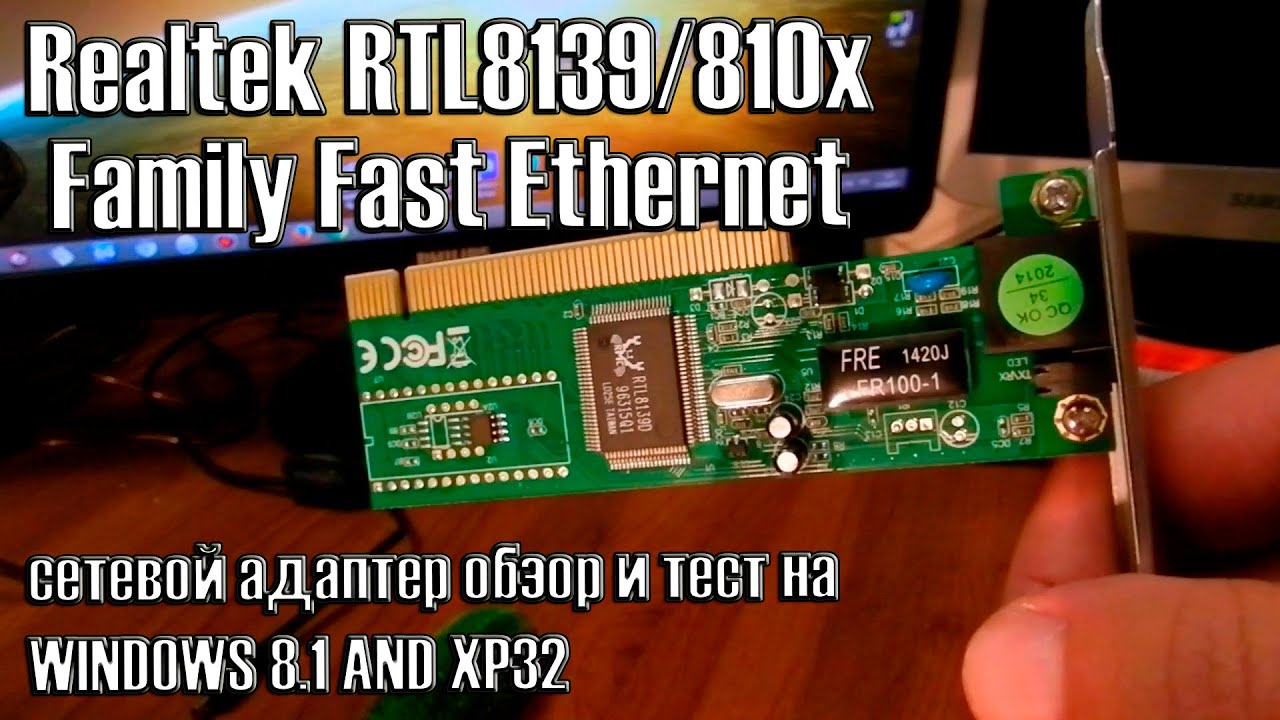 A RTL8139C chip as seen on a broadband adapter for a Sega Dreamcast video game console.

Notable Realtek products include 10/100M Ethernet controllers (with a global market share of 70% as of 2003) and audio codecs (AC'97 and Intel HD Audio), where Realtek had a 50% market share in 2003 and a 60% market share in 2004, primarily concentrated in the integrated OEM on-board audio market-segment.[3] As of 2013 the ALC892 HD Audio codec and RTL8111 Gigabit Ethernet chip have become particular OEM favorites, offering low prices and basic feature-sets. RTL8139-based NICs are dubbed 'crab cards' in Taiwan, alluding to the crab-like appearance of the Realtek logo.[4][additional citation(s) needed]

The increasing popularity of HD media players in 2009 led to the entry of Realtek into that market. The first series, the 1xx3 models[a]sold at a lower price than similar quality chipsets of Realtek's competitors. (The main competitors were the Sigma Media Players.)

Realtek produced three major versions of Realtek 1xx3 and several minor variations. The three major 1xx3 chipset versions (1073, 1183, and 1283) all featured the same chip in terms of format support and performance, the only difference being the added ability to record AV sources in the 1283. HD Audio support in the 1xx3 improved through the chipset's life with several revisions. The DD and CC versions of the chipset both added full 7.1 HD-audio support to the chipset.

The 1073 players all built on a common SDK (firmware+OS) provided by Realtek. This meant that they were all essentially similar in performance and interface. It also meant that producing these players was very easy for manufacturers, all they had to do was create the hardware and Realtek provided the software.

Key players from the Realtek 1073 era were the original Xtreamer, the Asus O!PlayHD, ACRyan PlayOn and the Mede8er MED500X. Manufacturers released hundreds of Realtek 1073 players.

In early 2011 Realtek released series 1xx5, including the 1055, and 1185. These are the successors to the 1073 series. All three chips ran at 500Mhz which provided a small performance increase. Otherwise, the chips offered the same comprehensive format support as the previous generation. All chips ran the same Realtek SDK4 Casablanca, which offered improved user-experience (aesthetically, added media indexing, thumbnails...) from the stock SDK. As with the later version of the 1xx8 chipset, full 7.1 HD-audio downmix and passthrough are supported in the 1xx5.

According to the comprehensive analysis released by Symantec in 2011 regarding the Stuxnet virus,[6] Realtek's digital certificate for Windows was compromised, allowing attackers to digitally sign malicious drivers without users being notified. The certificate was then revoked by Verisign: 'The attackers would have needed to obtain the digital certificates from someone who may have physically entered the premises of the two companies (Realtek and JMicron) and stole them, as the two companies are in close physical proximity.' states the report.[6]