Throughout this manual you’ll find information to help you get the most out of an app designed from the ground up with your productivity in mind. OmniFocus is a great way to organize, plan, and accomplish the goals in your life, and with OmniFocus 2 for Mac there’s never been a better time to dive in and see what it’s all about. We’re glad to have you with us!

It all starts with a basic idea. You have something that needs to get done, and you know you’d better make a note about it somewhere, but that sticky note on your desk isn’t going to cut it anymore. You’re ready to try a more reliable system, one that can keep track of all the things going on in your head, and maybe even help them feel a bit more simple in the process.

OmniFocus is the personal task management tool that helps you keep track of all the goals, plans, errands, and aspirations that come up in your life. Whether the task at hand is something small, such as setting a reminder to swing by the bike shop after work, or the tasks are part of a bigger goal, such as making plans for that long overdue vacation, OmniFocus helps you keep track of everything you need to do throughout your day.

Available on your Mac, iPhone, iPad, and Apple Watch, OmniFocus is packed full of tools to help you prioritize steps within complex projects or simply jot a quick to-do list for a weekly meeting. OmniFocus works great as a standalone productivity aid or in conjunction with whatever time- and task-management scheme suits your personal style.

OmniFocus for Mac complements OmniFocus for iOS, serving as your base of operations for productivity that extends well beyond the screen of your Mac.

For a video tour of the features of OmniFocus, check out:

If you are updating from an earlier version of OmniFocus, you may be prompted to migrate your database to a format capable of supporting the features of the latest version of the app.

When you first launch a version of OmniFocus that's compatible with the new database format, or choose Migrate Database... from the File menu, you'll see the Migration window that lists any clients that still need to be updated to the latest version to allow for the database migration to work.

If you're running a very old version of OmniFocus on a device that syncs with your current database, it may not be eligible for migration to the new database format. If this is the case, it will be indicated in a separate section of the Migration window. You'll be asked to disconnect any ineligible clients (choose Show Devices and Unregister those that aren't eligible) before proceeding with the upgrade.

Note
If you prefer to maintain sync compatibility with a very old version of OmniFocus, you can choose not to update to the new database format. However, newer features of OmniFocus that require the updated format will not be available on any devices that sync with that database. 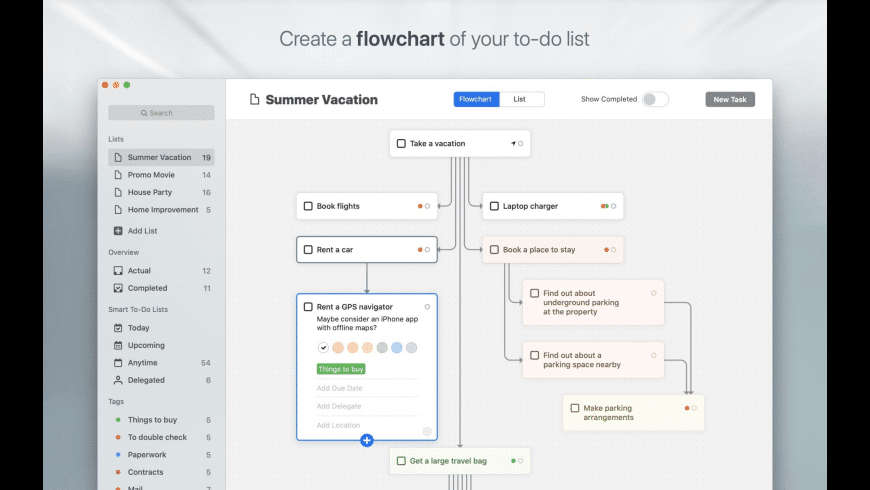 When all of your Macs and iOS devices with OmniFocus are at versions that support the latest database format, the Migration window gives the green light to make the transition to the new, improved format. Choose Migrate Database, and voila! OmniFocus syncs your database in the new format to all of your devices. If you choose Later, you'll be prompted to migrate again in one day (and you can always use the Migrate Database... File menu item to migrate sooner).

On the small chance that something goes missing during the migration process, before changing formats OmniFocus automatically makes a backup of your database that you can revert to if needed. We've prepared support articles with more detail on the migration and backup restoration process, and you can always contact us with any additional questions.

Making the Transition: OmniFocus 1 to OmniFocus 2

If you’re a user of OmniFocus 1 for Mac, you probably have an existing database that you’d like to bring over to OmniFocus 2. Due to changes in the way OS X handles files associated with specific apps (sandboxing), you’ll need to migrate your database as the first step to using OmniFocus 2 with your existing data. 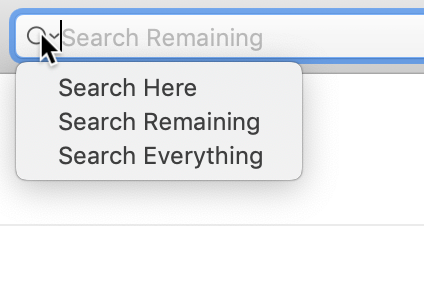 Syncing OmniFocus 2 to your existing OmniFocus database is the recommended method for migrating from other versions. It provides a straightforward pathway for keeping your data in the up-to-date state you want, and keeps all versions of OmniFocus playing nicely together if you’re running the app on multiple devices.

However, if you choose not to sync the first time you launch OmniFocus 2, you’ll have the option to migrate an existing database from OmniFocus 1. This doesn’t remove your old database (it just copies it over), so again, we recommend syncing to avoid later confusion and conflicts between multiple versions of your database.

After you’ve used OmniFocus 2 for a while, you’ll be prompted to archive parts of your database that aren’t relevant to your current set of projects (you can also create an archive manually by choosing Move Old Data to Archive from the File menu). If you have OmniFocus 1 installed on your Mac, OmniFocus 2 will check the default location for an OmniFocus 1 archive, and if it finds one, ask if you’d like to move it into OmniFocus 2’s sandbox and add your new archive data to it.

To help better represent their function, a few things have changed about how OmniFocus describes certain features of the app.

To get started with OmniFocus you can continue browsing the help, or dive right in to the app. If you’re starting fresh with a blank slate, you’ll see the tutorial project ready to offer some initial pointers. You can add the tutorial to your database at any time with the Help ▸ Add Tutorial Project menu item.

OmniFocus 2 gives you the power to engage with OmniFocus in ways even more uniquely tailored to your needs. We made the Standard edition of OmniFocus 2 for Mac with the idea that it has everything you need to get started “out-of-the-box”, including the vast majority of features covered in this manual.

In the following chapters you’ll get a full look at everything OmniFocus 2 Standard offers. It’s a heck of a lot!

In addition to the Standard feature set there are some specialized tools that appeal to users who’d like more increased view flexibility and workflow customization, and that’s why we made OmniFocus Pro.

When you try OmniFocus Pro, you’ll be able to: How to Try Pro

You can download the trial version of OmniFocus from our website. At any time throughout the trial period you can switch between Standard and Pro using Free Trial Mode ▸ Try Pro/Standard Edition in the OmniFocus menu to compare features and see which is the right fit for your needs.

Likewise, if you purchased OmniFocus 2 Standard from the Mac App Store you can download the trial version and run it side by side to compare features.

If you own a Standard license from the Omni store and would like to try Pro, if you’re still within the trial period you can temporarily delete your license (Licenses in the OmniFocus menu) to revert to trial mode and give Pro a try. If you’re outside the trial period, contact us and we’ll be happy to provide a Pro trial license.

Note
Unsure whether you have Pro installed? Check About OmniFocus in the OmniFocus menu for details on the current version and licensing status of the app; with Pro installed you’ll see a purple bar below the Omni address indicating your purchase.

One of the beauties of having OmniFocus’s documentation available in electronic form is that it’s always available whenever you need it. We have built the documentation right into the Help menu. We have put all of the documentation on our website where it can be searched and bookmarked. And we’re continuing the ongoing trend of creating EPUB versions of the docs and making them freely available on the iBooks Store.

Tell Us What You Think

We’re constantly working on updates for our documentation. Whether it’s CSS work, correcting the occasional typo (yeah, they do sometimes slip through), or adding details or clarification for a specific feature based on something we’ve heard from a customer, we’re always trying to make our documentation better and more useful for you.

If you have any specific comments you’d like to send us about the documentation, please do. You can drop us an email message via our Support queue, or you can ping us on Twitter; we’re @OmniWranglers.

Finally, we’d like to thank you for taking the time to read the docs.

The Omni Group has been around for 25 years.

Founded in 1989 as a technology consulting firm, they used to build custom software for NextSTEP users until Apple bought NeXT in 1997. Now Omni builds and sells their own software for OS X and iOS. Not least of which is OmniFocus.

But did you know OmniFocus for Mac was somewhat built by chance?

OmniFocus’s roots are as an add-on to OmniOutliner Pro called Kinkless (kGTD), which was built and developed by Ethan Schoonover. Though it was incredibly brilliant, kGTD was a hack. It was a bunch of AppleScripts that sat on top of a single OmniOutliner document with some custom buttons and even some Quicksilver actions for quick entry.

In 2006, Omni Group asked Schoonover, along with Merlin Mann, to help take the ideas and functions of kGTD and turn them into an official Omni task-management application…

Here’s the first publicly displayed mockup of what OmniFocus could have looked like:

After more than a year of private development with a group of about 500 alpha users, OmniFocus went into public beta in November 2007. At that time they also began pre-selling licenses and OmniFocus pre-sold over 2,500 copies in the first 5 days of the public beta.1

As you can see, not much in the UI has changed from the original Kinkless implementation of 2005 to what OmniFocus is today in 2010. You could say that OmniFocus 2 is kGTD 2.

But all that changed with the beta of OmniFocus for Mac 2.

On February 1, 2013 the beta of OmniFocus 2 for the Mac was introduced.

However, during the beta testing process, the Omni Group realized they needed to go back to the drawing board, and in June 2013 they pressed pause on the public beta.

Last year, during the testing window, I gave the beta 1 a good college try but just kept drifting back to my original version of OmniFocus that I’ve been using for the past 4 years. In short, I never felt all that comfortable navigating the previous OmniFocus beta.

However, earlier this week, Omni Group re-introduced the OmniFocus for Mac beta with a significantly updated design.

There are quite a few noticeable changes between the beta 1 and beta 2 designs of the new OmniFocus for Mac.

For one, the left-aligned checkboxes have been swapped out with right-aligned checkcircles (a cue from the iPhone app). Additionally, the whole task hierarchy now has a clear structure that flows from left to right.

Omnifocus 2 For The Macro

On the left-most side are the tabs for different views, then in the next column is the list of information relevant to the selected tab, next to that is the main task list displaying the tasks for the project, context, or date selected, and then on the right-most pane is the task’s information panel where you can fine-tune metadata related to that task if you so desire.

Aside from the right-hand alignment of the new checkcircles, I think every one of the changes in this newest OmniFocus beta is an improvement on an app that has been desperate for a visual overhaul for years.

Is Omnifocus Only For Mac

The new beta version of OmniFocus for Mac feels peaceful to me. It’s open, clean, organized, and logical. I like it.