Top New Patriotic Party (NPP) personalities converged on the forecourt of the State House yesterday to honour the name of the late Alhaji Fuseini Maiga.

The function was the Islamic funeral for the late founder of the Nasara Wing of the NPP who passed on recently in an accident.

Leading the party top brass to honour the deceased was Vice-President Mahamudu Bawumia; his eulogy for the man whose name has been etched in the annals of the NPP, touching the hearts of the hundreds of persons who thronged the forecourt of the State House.

Recalling the death of the deceased which sad incident occurred during an accident on September 27, 2020, he said his demise has left a void in the NPP, which would be difficult to fill.

“Indeed, the void left by Alhaji will be difficult to fill, especially by the New Patriotic Party and the many party faithful who took Alhaji as a figure of inspiration and guidance,” the Vice-President stated.

As a committed patriot who exemplified the values of a true Dankwa-Busia-Dombo apostle, Dr. Bawumia said the late Alhaji Maiga “was a democrat, a freedom fighter, selfless and dedicated to the cause he believed in.”

During his lifetime, the Vice-President said the deceased became synonymous with Nasara Club which metamorphosed to a wing of the NPP. This fact highlights the indelible contribution of the deceased to the fortunes of the NPP.

At a time when adversaries of the NPP mounted a sustained campaign of tagging the party tribalistic in the 90s, it was the late Alhaji Maiga and others who fought back, Dr. Bawumia recalled.

This led to the formation of the Nasara Club, the word in Hausa being victory.

He became the founding father of the club and as committed as he was, the Vice-President continued, Alhaji Maiga used his personal resources as many patriots did and continue to do, to advance the cause of the Nasara Wing. 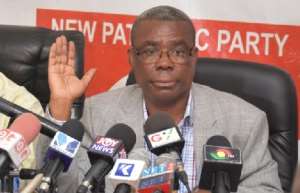 “His New Fadama house became the bureau of Nasara activities and the headquarters of Nasara Club,” he said.

As a visionary leader and a team player, Alhaji Maiga assembled a group of vibrant Zongo youth to articulate the views of Nasara and the party, Dr. Bawumia remembered.

As a democrat who believed in the freedom of the press he was, a friend of the press and together with his comrades, they constantly used the likes of the Free Press, Dispatch, The Guide, Crusading Guide, Chronicle and other newspapers as platforms for Nasara activities in the late 90s and 2000s.

The formation of Nasara brought Nasara or victory in 2000 with the election of President John Agyekum Kufuor, the Vice-President recalled.

Presiding over the spiritual aspect of the programme was the National Chief Imam, Sheikh Osman Nuhu Sharubutu.

The campaign manager for the governing New Patriotic Party (NPP), Peter Mac Manu is reported to be at the Korle Bu Teaching Hospital after he tested positive for the novel coronavirus disease.

Also on admission to the Unit is the Deputy Trade Minister, Carlos Ahenkorah.

There are reports that two other Deputy Ministers who have tested positive for the virus are at the University of Ghana Medical Centre (UGMC) receiving treatment.

The country suffered another loss after reports of the passing of the former General Secretary of the NPP, Kwadwo Owusu Afriyie, popularly referred to as Sir John.

The Forestry Commission boss died on Wednesday at the Korle Bu Teaching Hospital after testing positive for Covid-19.

Sources say he was admitted last Thursday and he was moved to the ICU when he started experiencing breathing difficulties.

He was subsequently placed on a ventilator.

Not long ago, the Sekondi-Takoradi Mayor, Anthony K.K. Sam died after his personal driver tested positive for Covid-19. The MCE died while receiving treatment at UGMC.

She went into self-isolation after she got to know her status.

The Health Minister has recuperated after testing positive for the coronavirus disease.

It is not clear whether the two have tested positive for Covid-19, they were reported to be admitted to a place called the ‘Red zone’ where only Covid-19 positive are kept.

The two public officers later confirmed in separate press releases that they had Covid-19 like symptoms so they self-isolated at the health facility.

Although Joy News sources could not tell whether they have tested positive they reiterated that the two gentlemen are on admission where only persons with full Personal Protective Equipment (PPEs) can go.